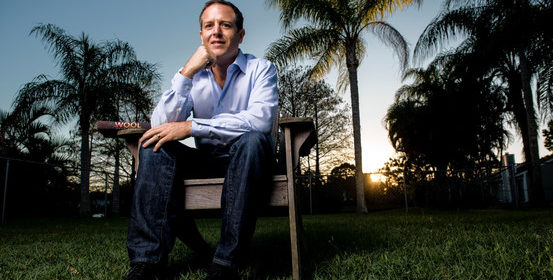 In addition to the video we published earlier today, the Wall Street Journal has published a full article on Hugh and Wool, providing readers new to the story with a great write-up on his career take off since he first published Wool 1 in 2011.

The story will be in the March 8 print edition of the WSJ tomorrow.

When “Wool” hits bookstores next Tuesday, publishing industry insiders will be watching the experiment closely. Simon & Schuster will release a $15 paperback and a $26 hardcover simultaneously, competing directly against Mr. Howey’s digital edition, which costs $5.99.

“We would have preferred to own all the rights, but that wasn’t going to happen,” says Simon & Schuster President and Publisher Jonathan Karp. “It was a very unusual circumstance.”

The story also interviews the women in his life such as wife, Amber Lyda, and mother, Gay Murrill.

Mr. Howey grew up in Monroe, N.C., the son of a farmer and a schoolteacher. As a teenager he devoured popular science fiction books like “The Hitchhiker’s Guide to the Galaxy” and “Ender’s Game,” and always had a wild imagination. He studied physics and English at the College of Charleston, but dropped out his junior year to sail to the Bahamas. He cycled through a series of odd jobs, working as a yacht captain, a roofer, and a technician for an audio-video company. Four years ago, he decided to give writing a shot. He and his wife were living in a 750-square foot house in Boone, N.C. He was unemployed; his wife, Amber Lyda, was working as a psychologist. He had an idea for a story about a young spaceship pilot who travels across the galaxy in search of her missing father. He sold the novel, “Molly Fyde and the Parsona Rescue,” to a small Indiana publisher for less than a thousand dollars. Sales were meager.

“When he first published ‘Molly Fyde,’ I’d call his wife and say, ‘How many books has he sold? Should I go to Amazon and buy three more?’” says his mother, Gay Murrill, who owns a yarn shop in Charleston.

Mr. Howey kept trying. He got a 30-hour-a-week job at a university bookstore that paid only $10 an hour but gave him some flexibility. He got up at two or three in the morning to write, and wrote through his lunch hour and after dinner. He designed his own cover art, enlisting his wife and sister to pose in photos. He would often jolt up in bed in the middle of the night to scribble down ideas.

So cute of his mom, seriously! And now she can go to a newsstand tomorrow and buy out the WSJ.

The article is a really great read, so you should check it out here at WSJ.com.

WSJ Ponders Whether ‘Wool’ is the “Next Hunger Games”
Hugh Howey on UK Radio Station Magic 105.4